Fate of Krevborna Part I: Choosing a Fate Build

FATE OF KREVBORNA
I've been thinking a lot lately about running a Krevborna: A Gothic Blood Opera campaign. Krevborna is an original Gothic horror setting with an Eastern European flavor written by Jack Shear and published by Dolorous Exhumation Press. It was inspired by some of my favorite media such as Castlevania, Ravenloft, and The Witcher in addition to the classics like The Castle of Otranto, Edgar Allan Poe, Dracula, and Frankenstein. The setting is also served well by the fact Jack is a university professor of Gothic literature at his day job.

Jack provides an introduction to the setting on his Tales of the Grotesque and Dungeonesque blog, and all of his blog posts about Krevborna can be found here:
I've mentioned before on several RPG message board sites and the now sadly retired Google+ RPG communities how I consider Krevborna to be a master class in campaign setting design and presentation. It's a refreshing approach and it works. Krevborna is an open-ended setting where everything is optional and allows the game master (GM) and players to customize and make the world their own without fear that some future supplement will come in to upset that freedom. There are no pages and pages of ancient history for the GM to read through before they can comprehend the setting and its themes, no historical timeline scrolling through the years and years before the player characters (PCs) come on the scene. Everything of interest from Krevborna's history that might affect the PCs in the current game session is presented as something immediately usable at the gaming table. And speaking of presentation, the setting makes excellent use of bullet point lists to concisely describe everything from locations, factions, and nonplayer characters (NPCs).

Now Krevborna: A Gothic Blood Opera is a system-neutral campaign setting; it doesn't come with any "default" RPG rule system or game stats. When I first read the book, it was those bullet point lists that got me immediately thinking about using Fate Core (or one of its many dial-tweaked builds) as the rule system—many of those bullet points could be used as Fate aspects as written! And not just character aspects but setting (theme), scene, and organization aspects as well. When the open-ended canvas that Krevborna provides is coupled with the narrative permission Fate Core games grant to players allowing them to contribute to building the campaign setting with the GM, Fate is a very attractive choice. So the question became, "Which Fate Core build should I use if I were going to run a game set in Krevborna?" This blog post will be the first in a short series exploring the answer to that question.

SO WHICH FATE?
Fate Core is the current "main" version of the Fate roleplaying game, and all other Fate games like Fate Accelerated, Atomic Robo, Fate of Cthulhu, and the newly released Fate Condensed are considered to be different "builds" of Fate Core. At their heart, they all use the same underlying system. Fate Core is probably the most like "traditional" RPGs in that it has a default list with 18 skills. Fate Accelerated does away with that skill list (what things you can do) and replaces it with six approaches (how you do things). Fate Condensed is a slightly tweaked version of Fate Core but presented in a compact format like Fate Accelerated—you can just dive in and use them, much like the Kreborna campaign setting.

When the author was running his home Krevborna campaign, his group used the Dungeons & Dragons 5e rules. This made me think The Fate Freeport Companion might be a good choice of Fate build since this book is essentially a Fate conversion of D&D and a good one at that. Fate Freeport sits at a sweet spot between Fate Core and Fate Accelerated too: it uses skills like Fate Core but that skill list is much shorter with only six skills (similar to Fate Accelerated's six approaches) named after the six ability scores D&D players have known for years. It's definitely a viable option for the right group, but in the end I decided it was a little too like D&D and felt I might as well just run a campaign using 5e (or 3.5e or Pathfinder from the same era Fate Freeport was released).

Ultimately I've decided upon using Fate Accelerated for a Krevborna campaign. Krevborna is a campaign setting that gives players and GMs the permission and the freedom to play the types of characters they want to play. Fate Accelerated offers this same freedom especially through the use of aspects. Aspects are true and grant narrative permission in all versions of Fate, but Fate Accelerated with its use of approaches and tighter rules focus relies on this permission even more heavily than other versions of Fate do. It feels like a natural fit to me. You can download a pay what you want PDF version of Fate Accelerated from Evil Hat Productions on DriveThruRPG or view the complete rules online at the Fate System Reference Document (SRD) website:


*** Aside: Fate and Horror ***
There has been some discussion of whether or not Fate is a good fit for horror roleplaying ever since Fate Core first came out. Fate characters out of the box by definition are competent, proactive, and lead dramatic lives. If you are playing a horror game where the characters are Average Joes and Janes thrust into the horror possibly against their will, then yes, this is a legitimate concern and Fate out of the box would not be a good fit. If you want to play a Fate horror game with those types of characters, I highly recommend purchasing the Fate Horror Toolkit as well as reading The Horror Paradox section from the Fate System Toolkit online at the Fate SRD to see how it can be effectively done. Also of interest is the Fate Codex magazine article Sustaining Dread by Richard Bellingham available at the Fate SRD. Krevborna characters, however, are presumed to be actively fighting against the supernatural evil tainting their land and are thus competent, proactive, and leading dramatic lives.
*** Aside: Fate and Horror ***

There is another reason I chose Fate Accelerated though. One of the themes I especially liked in Krevborna was the possibility of temptation and corruption of the PCs if they delved too deeply into the dark forces tainting the land, making Faustian bargains with fell beings, siding with a lesser evil to fight a greater one, or casting dark magic spells. This reminded me of an article from the Fate Codex magazine written by Clark Valentine (one of Fate Accelerated's designers) about corrupting Fate Accelerated approaches to model such things as giving in to the Dark Side of the Force (Star Wars) or the temptation of wearing the One Ring (The Lord of the Rings). Essentially, you can choose to succeed as a very serious cost on an action by corrupting one of your approaches: Clever becomes Arrogant, Sneaky becomes Treacherous, for example. You can read the full article online at the Fate SRD:


This article also suggests adding physical changes to the character's appearance that reflect their corrupted approaches, and the Krevborna campaign setting book even has a table for this! It's a perfect fit for Krevborna I would definitely include in my game—see the Evidence of Unnatural Contact table on p. 56.

I will do another blog post on creating characters for Krevborna with Fate Accelerated, but next up I want to settle on a Fate magic system for the campaign.
Posted by Joe Bardales at 2:35 PM

Join me as I create new content for some of my favorite horror roleplaying games like CRYPTWORLD, Dead of Night, Fate Core/Fate Accelerated and more.

Séances have long been a spooky staple of ghost stories and horror films. They were a popular form of entertainment during the mid 19t... 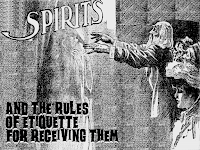 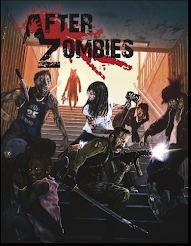 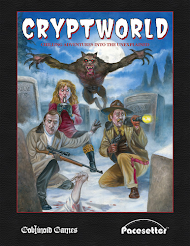 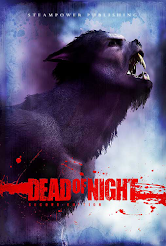 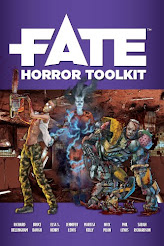 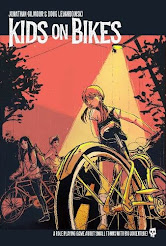 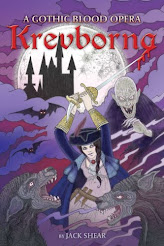 MASQUE OF THE RED DEATH 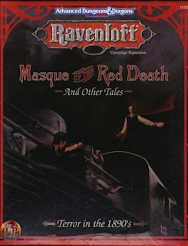